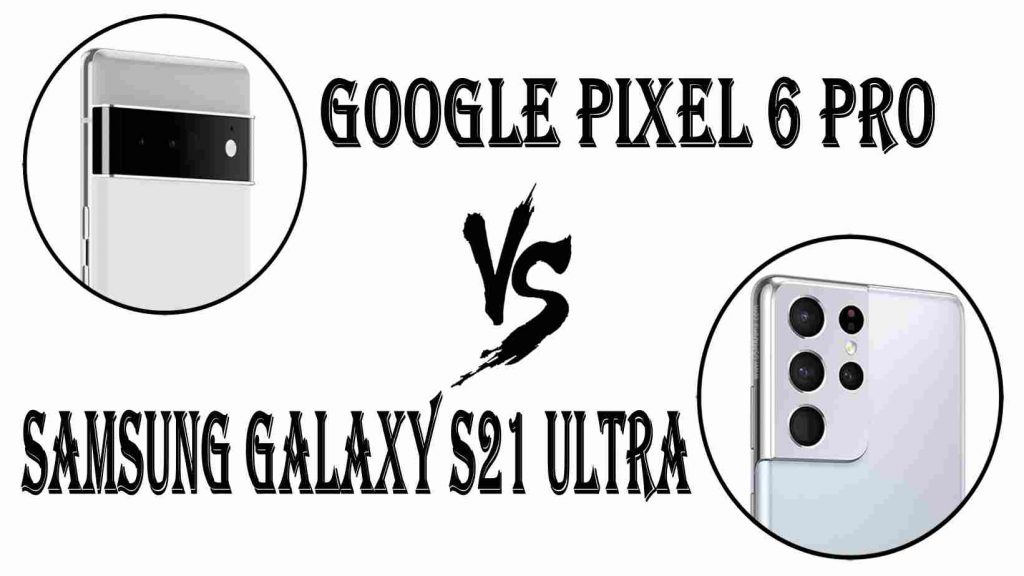 Google recently leaked lots of information about their latest Pixel 6 lineup. The Pixel 6 Pro seems quite a competitor to Samsung’s Galaxy S21 ultra. Let’s have a look at the comparison –

The 6.7-inch Pixel 6 Pro will be competing with the 6.8-inch Galaxy S21 Ultra. Both the devices are having a QHD+ display, and the size difference among them isn’t that of a big deal. The S21 Ultra is a huge phone when it comes to thickness and camera bump. However, Pixel 6 Pro will be the same but in a different way.

The way you can recognize an S21 or an iPhone, Google is trying to make a signature aesthetics with their Pixel lineup as well. In this case, the horizontal weird camera bump. Moreover, S21 Ultra and Pixel 6 Pro has more or less the same strong build quality.

Google is serious about the Pixel 6 smartphones. Even being a successful software, they want a rigid position in the smartphone market and avoid a fate like LG. Looking back to older Pixel phones, Google didn’t put many thoughts on cams. Not to mention, Pixel 6 Pro has more to offer.

Pixel 6 Pro comes with a three-cam module in 2021. There is a 50MP primary sensor, which is the Sony IMX700-series, a 12MP ultra-wide-angle, and a 48MP 4X periscope zoom lens. This is the first zoom lens shooter that Google used on a Pixel device. Not only that but also the main cam is the largest sensor on a Pixel as well.

Later on, those pictures are modified with the aforementioned algorithms to enhancement color combinations, blends, and eliminate noise from them. Therefore, 50MP as the main cam of Pixel 6 Pro might sound small in number but has the capability to do more.

Not to mention the new Google Tensor is an advanced SoC with AI-powered algorithms as well. According to Google, the SoC will be providing necessary support on image processing, video encoding, and so on. Thus, Pixel 6 Pro will offer impressive images for sure.

“What I can reveal today are significant improvements and innovations in photos, video, and speech recognition. With Tensor, for example, we can further improve computer-aided photography. With machine learning, photos get much closer to what we see with our eyes. Videos are also complicated and require a lot of computing power, which is why we have not yet been able to use our sophisticated machine learning for this. This is possible with Tensor.” – Rick Osterloh, Google

Speaking of “Google Tensor,” this is the first chip that Google made to power the Pixel 6 lineup. Google Tensor is a 5nm process based on Samsung’s superior EUV production method. The same method was followed by Qualcomm for making their Snapdragon 888 processors which powers S21 Ultra as well.

Like Galaxy S21 Ultra, Google may offer 12GB and 16GB RAM on Pixel 6 Pro. Not to mention, Android 12 and all those image processing and stuff will require a huge memory. You see, smartphones are pushing the edge these days. There are phones like ASUS ROG Phone 5 Ultimate that come with a massive 18GB RAM as well. So, yeah, Google can equip a 16GB RAM in Pixel 6 Pro.

Galaxy S21 Ultra comes with a 5,000mAh battery. Google is doing the same, putting a 5,000mAh battery on the Pixel 6 Pro. The company now has their in-house optimized chip, their own OS, thus a 5,000mAh battery will do great. They should be taking note not to miss the fast charging feature as Samsung, iPhone, and every other brand is offering.

“We weren’t represented in the smartphone flagship segment for the past two years – and not really before that either. But the Pixel 6 Pro, which will be expensive, was designed specifically for users who want the latest technology. This is an important new approach for us and we believe it will help us be attractive in new market segments. But the Pixel 6 also belongs in the upper segment and can keep up with competing products. I would call it a “mainstream premium product”. – Google

The reasons behind smartphones will be costly these days is the periscope cam, and the chip. You can somehow ignore the global chip issue but not the periscope cam. That thing is really expensive which increases the overall price of a smartphone. You will experience the same overpricing issue if Apple integrates periscope shooters on the iPhone 13 models as well.

One question remains at the end, Which one should be your pick? You see, both of them are great. Samsung did really well selling their S21 lineup at the beginning of 2021 and people love the S21 Ultra. However, you should pick the Pixel 6 Pro if you are more of a tech guy right now. Galaxy S21 Ultra is nearly a year old now. Ergo, Why investing thousand dollars on that! Stay tuned for more.

Apple AirTag: Here's Everything You should Know
Redmi K40 Gaming Edition Released in China
Lenovo Thinkpad X1 Titanium Review: Best for Businessmen and Travelers
iPhone 13 Vs Pixel 6: Which One should be Your Pick?
Samsung Galaxy Z Fold 3 Review: Should You Buy or Pass?
New 12.9-inch iPad Pro will need a New Magic Keyboard
Huawei FreeBuds 4i: The Best Earbud Under $100